Thousands Of Germans And Polish People Wait At Their Train Station To Welcome Ukrainian Refugees, Offer Them Place To Stay. – Video

Map And Videos Showing Number Of European Countries Like Poland And Germany Willing To Accept Ukrainian Refugees And Waiting At Train Station To Welcome Them And Offering Them Place To Stay Is Giving Hopes To Everyone Ukrainian refugees who were dis-placed from their homes following the inva—n by Russia and headed to Germany were in for a pleasant surprise as they were welcomed by thousands of Germans with offers to stay at their homes.

Those running away from the w-r were already in a position where the need of finding a place to stay in a foreign land had taken a big effect on them.

As they alighted at Berlin’s central railway station, thousands of refugees were greeted by kind-hearted Germans welcoming them and inviting them to stay at their homes. Some of the placards read, “Big room. One-three people. Children are welcome too! For as long as you want.” Another read: “2 adults, 3 children home.” One homemade sign read: “Can host two people! Short or long-term.”

Those who wished to travel to other countries were given free tickets to travel to anywhere in Europe. Those who didn’t have any particular destination in mind were ushered into a hall where they were welcomed and handed necessities before they met with Germans who offered to host them.

The refugees were given food and drink and then handed sim cards for phones, before a team of medical teams, translators, volunteers, and organizers guided them. One incredible moment of humanity amidst the scene was when a man with a megaphone asked if someone could accommodate 13 people and one person stepped forward to huge applause from everyone in the crowd.

For many of the Germans waiting at the station, their empathy and kindness stem from their own experience. “I am more or less a child of a refugee,” said Margot, before explaining that her mother had to escape Hitler’s Nazi regime.

“So I feel obliged to do something for refugees. The majority of them leaving the country are women and children due to the Ukraine President declaring Martial law that prevented men between the ages of 18-60 to leave the country in the wake of the Russian inva—n. Anastasiia and her son Artemii were one of many families to arrive by train and seek refuge in Germany. Her husband Dimitrii had to stay back in Ukraine. Anastasiia is yet to explain to her son why his Dad isn’t with them. She said that her father had also stayed back in Ukraine. Matina, who opened her home to refugees, said it was the very least they could do.

“We have lived in peace our whole life,” said Matina. “We don’t know what it is like to live in w-r. Our first thought was we need to help a family so that they can feel safe. We will give them some peace, in this house.” In the wake of Russia’s inva—n of Ukraine, the EU has asked all 27-member nations to grant asylum to Ukrainians for up to three years. European authorities were picked on by many countries including the middle eastern countries, who are welcoming the Ukrainian refugees to their land.

The news coverage of the w-rs has also raised alarms with many openly suggesting that this w-r felt more personal to them because Ukrainians much like themselves have “blue eyes” and “blonde hair,” noted a report by CNN. While some reports said that the city of Mariupol was subject to intense str-kes by the Russian army, Mariupol remains under Ukrainian control but has likely been encircled by Russian forces,” the ministry said, according to CNN.

Previous Elementary School Custodian Didn’t Win State Award, So Community Surprises Him With $35k Check – Video
Next Guy Forgot To Change His Address In His Chipotle App And It Resulted In The Sweetest Exchange 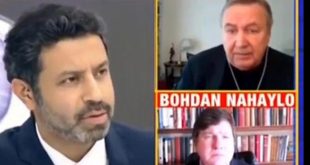