A video of an Indian TV debate on Ukraine has gone viral after the host went about picking at a guest for more than a minute live on air before realizing he was talking to the wrong person. The clip shows Rahul Shivshankar, a right-wing television anchor for the Indian news channel Times Now, exchanging arguments with Bohdan Nahaylo, the chief editor of Ukraine’s English-language newspaper Kyiv Post.

In the video, Shivshankar appears to believe that Nahaylo is Daniel McAdams, the executive director of the Ron Paul Institute for Peace and Prosperity, the other panellist on his show.

In the clip, Mr. McAdams is seen talking at the top of his voice to stop the debate so that he can tell the anchor he was misunderstood. Believing he is addressing an American expert, Shivshankar says to Nahaylo: ‘Mr. McAdams if you are so concerned about Ukrainians, get off the fence and send your forces and put boots on the ground.

As cross-talk continues between Shivshankar and Nahaylo, Mr. McAdams himself can be heard saying, “I am not even talking.” He goes unheard by Shivshankar. At this point, Mr. McAdams tries to talk saying, “I’m not talking! It’s the other guy who’s talking. I haven’t been able to say a word.” Shivshankar without realizing goes on to respond saying, “The man has gone completely balli–ic, and if he feels so strongly, he should go and fi-ht alongside Ukrainians.”

It appears the confusion may have been made on the part of the show’s producers, with on-screen subtitles for Mr. McAdams and Nahaylo showing the wrong way around from the start of the debate. Clips of the video have been circulated widely on social media. Indian sports journalist Prem Panicker asked users not to generalize Indian news media based on one clip. British anchor Piers Morgan shared the video and joked about how important it was to check who your guests are. 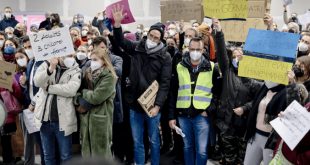 Thousands Of Germans And Polish People Wait At Their Train Station To Welcome Ukrainian Refugees, Offer Them Place To Stay. – Video